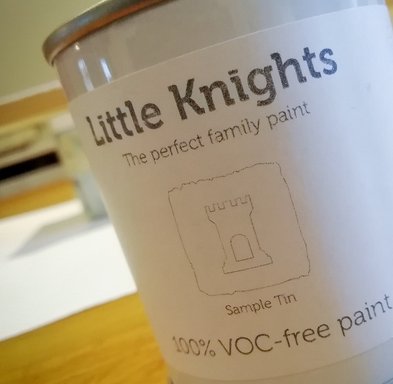 I like the company ethics and the brand visuals are very appealing - which shouldn't matter in this context but it did make me want to look deeper into what they do.

Have a look at their web site and you will notice they have a claim of !00% VOC free. That's a significant claim but it appears tests have been done that confirm it and they have even defended a complaint via the Advertising Standards Agency successfully when a competitor disputed the zero VOC.  I have been informed by Little Knights that their paint is natural as far as possible but there are necessary synthetic ingredients added in order to optimise performance.  Even these synthetics are broken down into harmless component parts after disposal.

I wanted to give this paint a try because it's the only eco friendly water-based gloss I have found so far. There are some natural gloss paints made with plant oils which are nice to work with but require a lot longer to dry before re-coating so are not always practical.

Little Knights say the paint has absolutely no odour. I'm not sure I totally agree with them though. There a slight and pleasant aroma but when you're working with the paint you don't smell it so yes it is pretty much odourless if you don't stick your nose right in it.

I thought it looked a bit thick in the tin but after a quick stir it looked about right and I wanted to try it first without any thinning. I think it might level a little better with a drop of water next time but as it is, straight from the pot, it flowed nicely and levelled off pretty well. It does need laying off properly (but quickly) to avoid marks and for anyone who normally struggles with brush marks in water based, this might be a challenge. That's a reflection of the way water-based paints work rather than a fault.

Recoat time is pretty fast, I left it overnight simply because I put the first coat on late in the evening. But I think a recoat will be possible in a couple of hours which is impressive. The test was done on a new bit of pine skirting that was primed with two coats of Zinsser BIN, just because I had a tin handy.

And talking of undercoats, apparently the solid content is high in this but the first coat going over BIN (bin from a tin seems to dry off white) I was a bit unsure of the opacity but when it dried it looked ok. Second coat covered easily. The paint is self priming so in theory it can be applied directly over previously painted woodwork, obviously after appropriate preparation.  I haven't yet had a chance to use it on a job yet but I will do so the first chance I get. 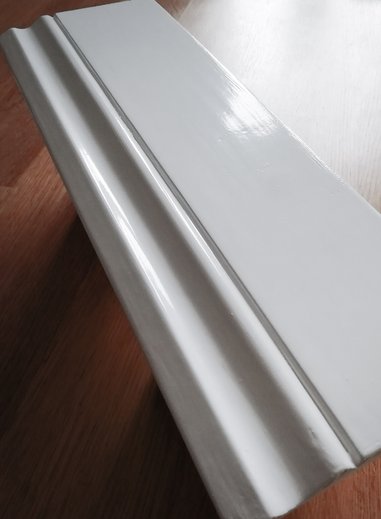 I want to put some on a vertical doorframe sometime and see how thick I can get it on before it runs. Floating on a flat piece is not really a good test in that respect but it shows what the paint can do.  The company told me this was more of a semi or soft gloss but with two coats on prepared wood I found I could get a sheen at least as good as any of the water-based acrylic gloss paints on the market.

Before the top coat was applied, I lightly sanded and the paint was already pretty tough. I waited a week and knocked it about a bit and it really is a hard finish - very durable. Oh and very white although it is available in all the other colours in their range.

Currently only available in 750ml for £24 direct from Little Knights.  For professional decorators I think it would be useful to be able to buy it in 2.5L tins too.